Home
Poker 101 – How To Play Poker For Beginners
Poker Position Explained: Find Out Why Position is King!

Position is one of the most important concepts in poker and is something that a lot of new players get completely wrong.

To put it simply:

Position in poker refers to the order which players are allowed to act. A player who acts first is “out of position” while a player who acts last is “in position”. Playing in position gives a distinct advantage due to the extra information gained and the ability to more effectively control the size of the pot.

There are two scenarios to discuss regarding position: preflop and postflop.

During the preflop round of betting, you can either be playing from early, middle, late position or the blinds with further breakdowns depending on your exact seat (which we will get into in a moment).

The important thing to remember is that these two aspects are related. When you play from an early position preflop, you are more likely to have to play out of position postflop. Whereas if you play a hand from late position you are fairly likely (or in some cases guaranteed) to be playing in position for the rest of the hand.

The fact that your starting seat determines whether you are more or less likely to be playing in position postflop is a very important factor that drives our opening strategy quite significantly.

Let’s dig deeper into this and find out what the positions are on the table and why understanding position is so important to playing winning poker. 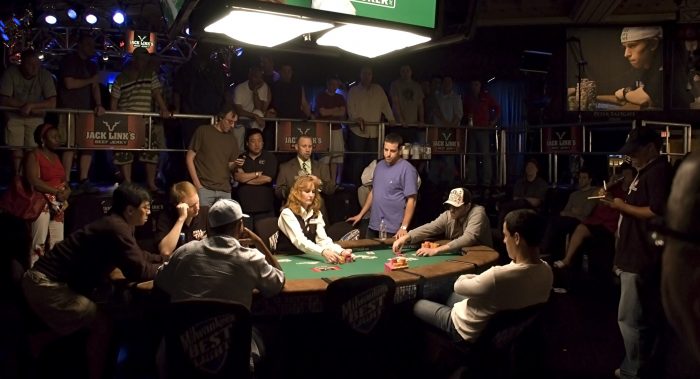 What are the starting positions in poker?

Each seat at the table is given a unique name which allows poker players to easily identify what hands they should be playing (more on that later) and how they might expect their opponents to play.

These seats are grouped into one of four categories:

The naming of the positions differs slightly depending on how many players are seated at your table, but let’s first take full-ring (9 handed) which is the most common casino format.

The image below shows the four categories we mentioned but also broken down further with the names of each seat. 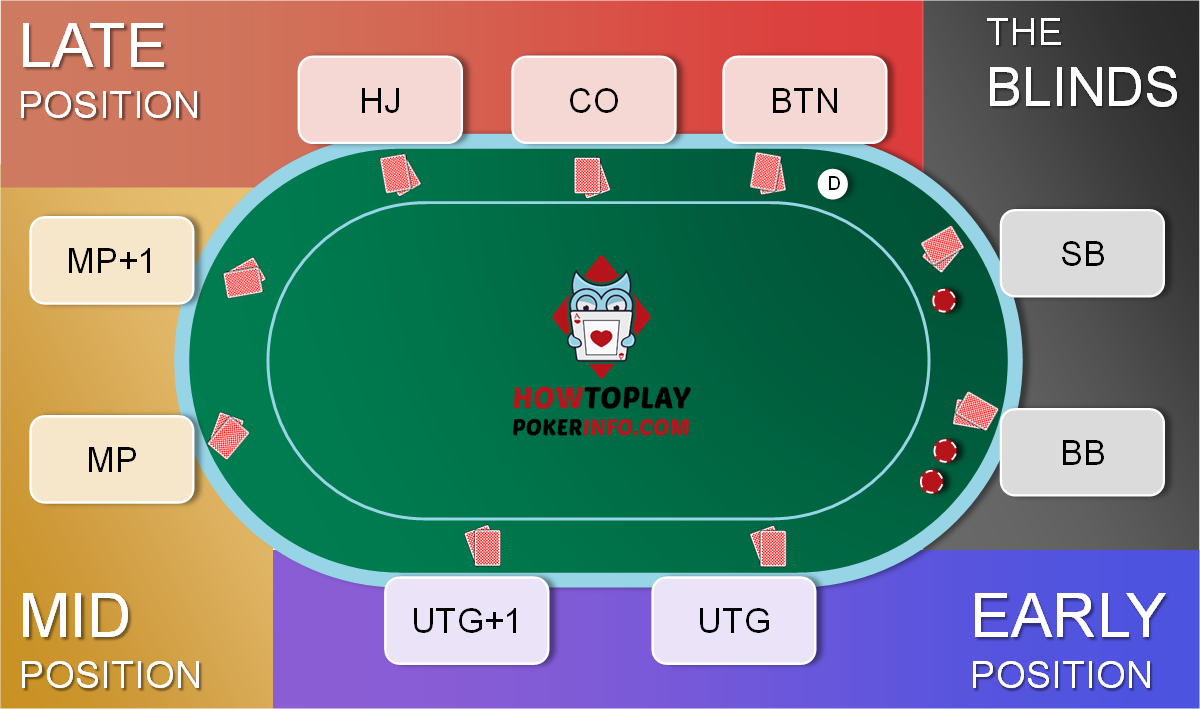 In case you aren’t familiar with the acronyms, here’s what they stand for:

The first seat to act is referred to as under the gun and is located in early position. “Under the gun” is a term that means to be “under pressure to act” as in you are “being held at gunpoint”. 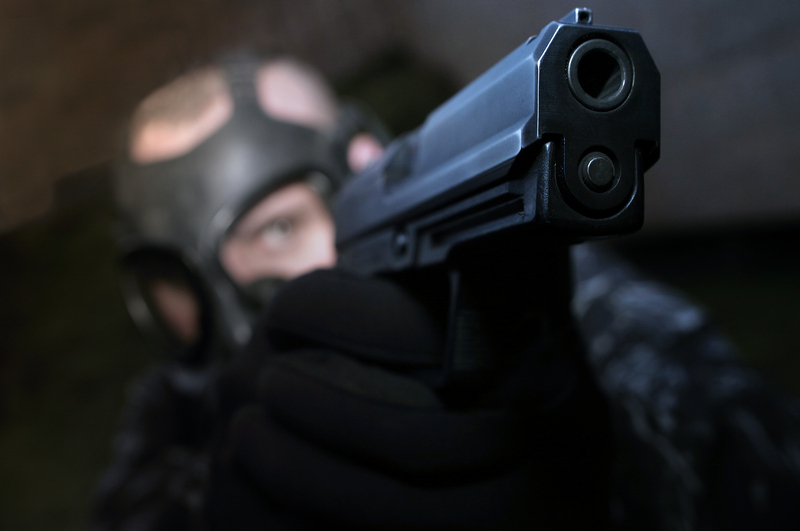 This translates to the analogy of the first seat at the poker table who is under pressure to make the opening decision of the freshly dealt hand.

On a full ring table with nine players in total, there are eight players waiting to act after UTG. So there is a strong likelihood that if you decide to play your hand, another player at the table will wake up with a premium hand.

Even if someone is dealt a mediocre hand and decides to play, you will be playing out of position on postflop unless they happen to be in the blinds.

Because of this, you must carefully select what hands you wish to play. 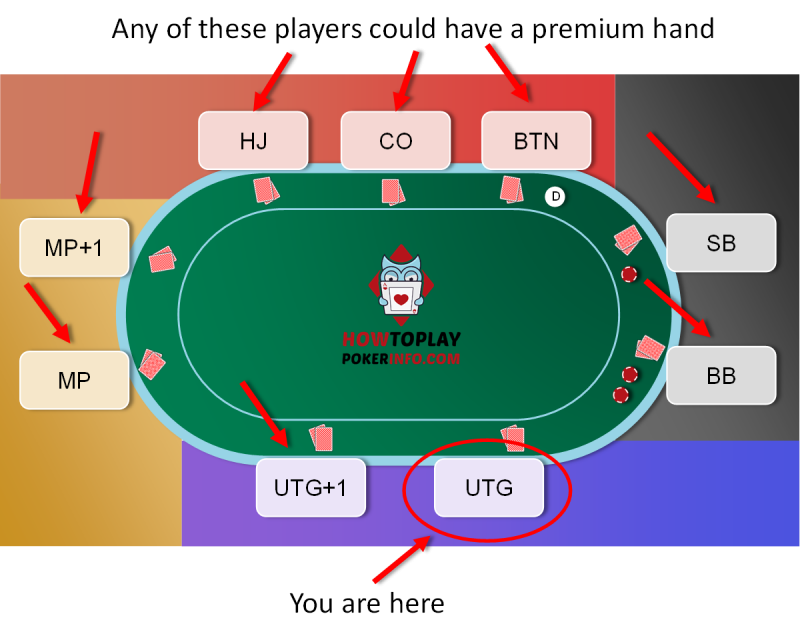 To illustrate this a little further, let’s imagine we would like to open 66 from UTG. To some, this may be a fairly standard open.

But consider the probability of that any one of these players has a strong or premium hand of 77+, AJs+, KQs, AQo+, KQo

This range represents 7.5% off all hands, and the probability of a player having one of these hands is shown below:

So there is almost 50% chance some has a hand that is at least flipping with 66 and in many cases dominating. Pocket 66s only has 37% chance of winning if you were to go all-in versus that range, however, you will realise a lot less of that equity due to the likelihood of high card to your pair making it very difficult to play.

Equity realisation is a complicated subject which I won’t go into detail here on but PokerNerve has a great article on the topic which you can read here.

So the key takeaway:

When there are many players still to act preflop, you need a very strong hand to even consider entering the pot.

Moving clockwise around the table, the next player to act is referred to as “under the gun plus one” or UTG+1. This seat plays very similarly to the UTG and hence these two positions are grouped into early position poker strategy.

Since there are only seven players left to act when opening from UTG+1, you can play slightly more hands. A typical opening range on a full ring table will be approximately 9% from UTG and 10% from UTG +1 which looks something like this: 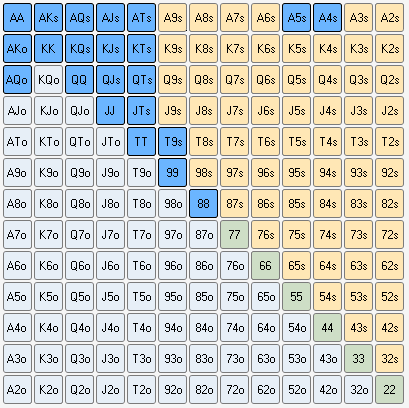 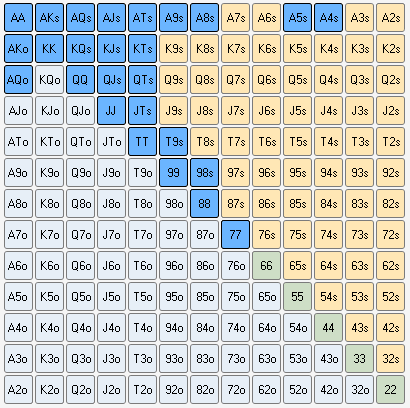 These images are from a piece of software called Equilab which you can download for free here. This software allows you to save your ranges for later, turn percentage opens into actual hand ranges and calculate your equity versus another hand or range.

The next position category is middle position. From here you should still be playing fairly conservatively, however, you can open a few more combos of hands when compared to UTG since two players have already folded meaning it is less likely:

MP+1 should also be played in a similar manner to MP, albeit with slightly looser starting hand requirements.

A typical opening range will be approximately 12% from MP and 16% for MP +1 as shown below: 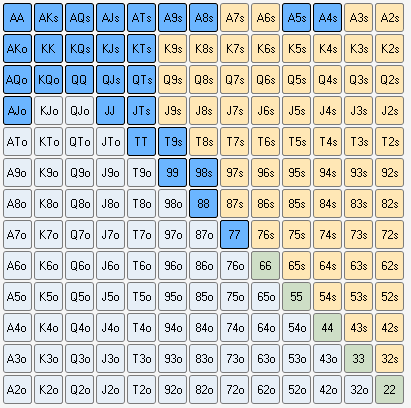 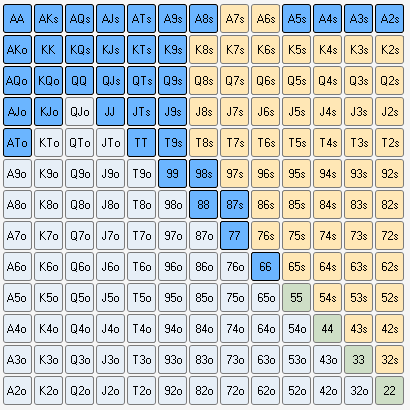 Following MP is late position which represents the three seats of hijack, cutoff and button.

We use individual names for each of these positions since they play quite differently and as a result, there is quite a large difference in strategy needed.

Although this might seem like a lot to take in at the moment, with all the different seat names and acronyms, you will have no problem remembering once you get in some practice. It completely automatic to me now and I don’t even have to think about it.

Hijack will play more hands than MP with a 19% opening range but it’s not until the cutoff and the button where we really start to open our range up. For example, in the cutoff we will like to open 26% or so of hands whereas on the button (OTB), we will open closer to 45% of hands if you are facing suitable players in the blinds.

The reason for the stark adjustment in starting hands is because there are so few players left to act (either 3 for the cutoff, or 2 for the button) and if we do get action, we will be in position against the blinds.

Due to the fact that you will always act last on the button when playing postflop, it is considered the best and is almost always the most profitable seat on a poker table.

The blinds are a slightly different kettle of fish. Firstly, players in the blind have to put in a small “fee” before seeing their cards i.e. there are putting in money blind into the pot, hence the name.

Secondly, when playing from the blinds, you will mostly be reacting to other player’s raises as opposed to make them yourself. This forces you to use a different strategy than we have been using up until now – you must now start calling much more often, particularly from the big blind.

The Small Blind is the worst seat (as you will always act out of position and act with the least amount of information) and the Big Blind is the least profitable seat on the table as you have to put a whole big blind into the pot without even seeing your cards.

The two redeeming qualities of the big blind are that we already have 1 bb invested into the pot which means despite our positional disadvantage versus all seats except the SB, we will usually have the opportunity to “close the action” by calling and seeing the flop.

Closing the action means that we are guaranteed to realise some of our equity (potentially allowing us to hit a piece of the flop). The same can’t be said for the SB where if we call a raise, the Big Blind has the opportunity to reraise us with a squeeze and put us in a tough spot.

6-max tables generally play much more aggressively and in many ways can be thought of by just simply removing the first three seats from a full ring table.

However, the naming convention also changes somewhat i.e. the first player to act in a 6max table is still called under the gun (and not MP+1 as would be the case in a full ring table).

The naming convention for a 6max table is shown below. 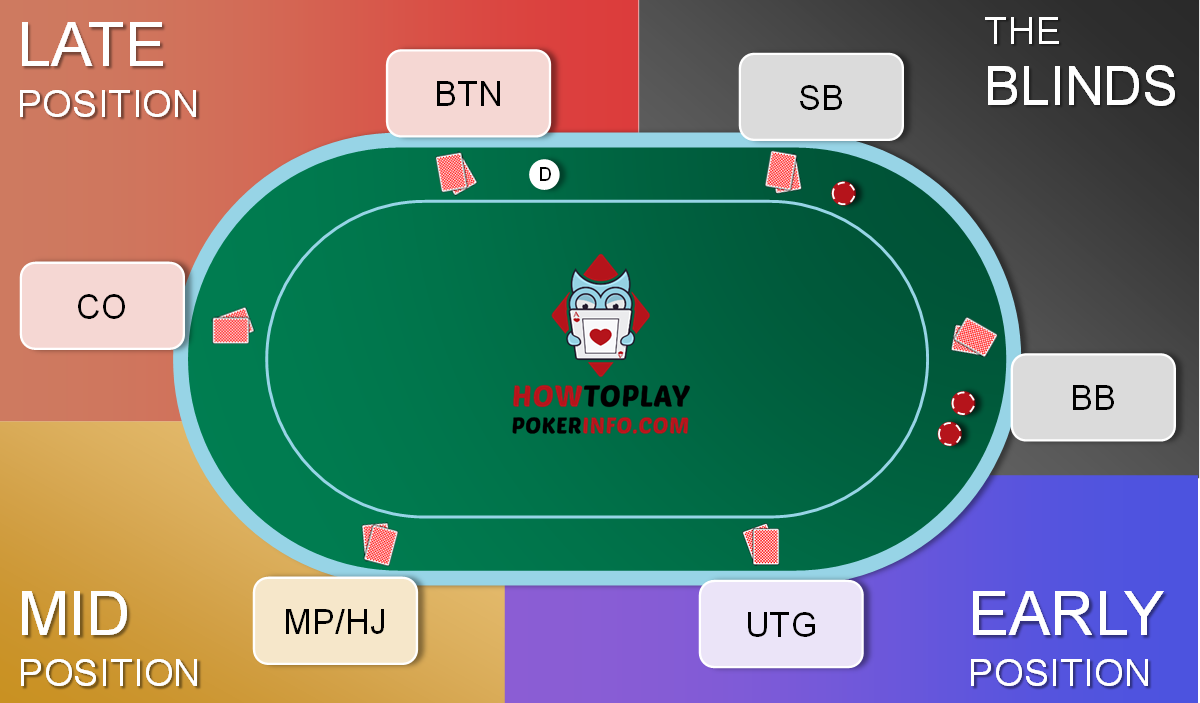 For the difference between a fullring and 6max table strategy, see my article here on this topic.

Note that in a 10 handed table there is also an UTG+2 added before MP starts. In this case, UTG should play slightly tighter and on a 9-handed table.

Here is an example of how we would play pairs in a 6max game:

As shown, we should almost always play pairs since they are one of the best starting hand types. But with the other hand types, it is less cut and dry.

Check out the Common Poker Mistakes to keep learning. 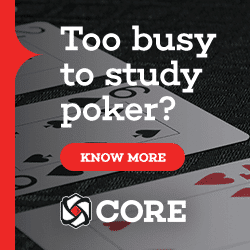 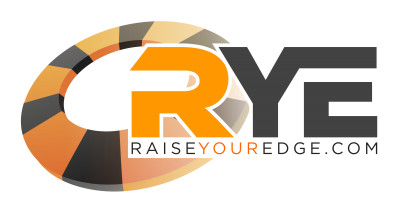 Black Friday Sale: Get $150 off the Apprentice Tournament Masterclass by Raise Your Edge.
Find Out More