In the sea of different training courses and materials out there, it’s not quite common to find a course that’s targeted specifically at beginners. This is probably because the beginner content is mostly readily available online as it is so with a bit of effort, anyone can get what they need for free.

Still, Raise Your Edge decided making a beginner’s course for those making their first steps into the world of online poker cash games was worth it. Named Elementary Cash Game and taught by ‘faLLout86’, an experienced player and poker coach, this is a course designed for poker's new entrants.

The introductory video makes it very clear that the knowledge contained in the lessons to follow will be of most use to recreational players and those new to 6-max cash games playing up to NL50. Apart from knowing the rules of the game and some basic concepts like bluffing and value betting, no previous knowledge is required to jump straight into this one.

Elementary Cash Game by Raise Your Edge is divided into two main parts, covering preflop and postflop play. Each part contains three videos that cover some of the most important concepts someone looking to become a profitable player needs to know. The course doesn’t go into any complex concepts or complicated math so it’s super easy to follow and understand.

The first video in the course covers one of the most important topics every player needs to know – open raising before the flop. ‘faLLout86’ goes through graphs for different positions at the table and shows what hands you should be opening with.

However, this isn’t just a dry lesson that gives you a run through several charts. It also explains the logic behind constructing your opening ranges. For example, why do you want to play more suited hands? To a seasoned poker player, there is no mystery here, but to someone new to the game, this is very valuable.

Opening charts also contain the information on what hands you should be continuing with when facing a 3-bet and what lines are your best option (calling, 4-betting as a bluff or for value). So, this video will give you a really solid preflop game-plan that will help you know what to do in almost every situation and avoid expensive mistakes often incured by new players.

Defending from the Blinds

Playing from the blinds is another crucial segment of preflop play. While blinds are the worst position at the table by default and you’ll be losing money from the blinds no matter what, adopting solid strategies will help you seriously reduce these losses.

Once again, ‘faLLout86’ brings out charts for the blind play, showing what hands you can and should be defending against raises coming from different positions, breaking them into two categories: just calls and 3-bets. You’ll see how these ranges change as the raiser’s position changes and they get closer to the button.

A lot of emphasis is put on the play against button raises as this is one of the most common scenarios. The video explains how you should be adjusting when playing against a button raiser and shows just how wide you need to be defending, especially when facing a small raise size.

The second part of the lesson focuses on small blind play. Unlike the big blind, where you’ll have better odds and better position, small blind is where you really need to be careful. In fact, given this is a series for beginners, ‘faLLout86’ suggests you shouldn’t have a calling range in the SB at all. Your range in the small blind should only have folds and 3-bets.

One exception to this rule is when you have a maniac in the big blind who is very prone to squeezing. In this case, you can include some of your strongest hands in the flatting range with the intention of trapping the big blind.

For the first scenario, ‘faLLout86’ explains many important things you should be thinking about when making a decision to just call. This includes the cutoff’s raise frequency, their perceived range, as well as the sizing (which is something many players don’t take into account) enough.

He then goes on to explain how you should be adjusting your calling range based on how wide they’re like to open. For example, some hands that are in a 3-betting range against a somewhat tighter opener will become profitable calls against a player who opens very frequently from the CO. 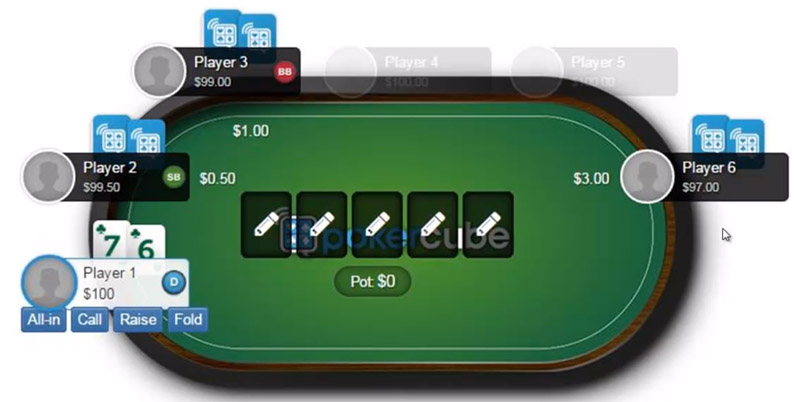 Once again, ‘faLLout86’ doesn’t just state these things as facts but rather takes the time to explain the rationale behind them, which is very important for new players. After the theoretical discussion, there are several hand examples showing these CO vs. BU scenarios.

In the second part, the video looks into spots where you’re in the big blind and facing a raise from the small blind. Figuring out what hands to call with here depends on the SB player’s tendencies but you’ll also need to raise with your strong hands for value and to deny equity. Additionally, ‘faLLout86’ explains you need to have a bluffing range as well and what it should look like.

The first lesson in the postflop play section covers one of the most common spots in Hold’em: playing as a button against the big blind. In this video, ‘faLLout86’ continues with the approach of focusing on usual and very frequent spots as mastering these first is more important than spending time on figuring complex and relatively infrequent situations.

In this lesson, you’ll learn how to define your continuation bet ranges on the flop and how to size your bets properly in different spots. 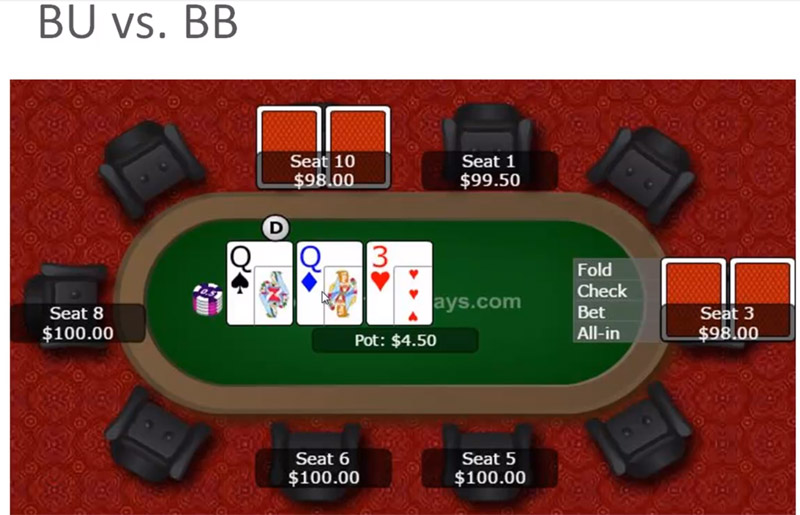 One very useful takeaway from this video is the part where ‘faLLout86’ discusses relevant stats to look at when making the decision. Since the Elementary Cash Game course is aimed at beginners, many of them won’t know much about HUDs and stats. So, the fact this video looks into some of the most important stats and their meaning will be of great help.

The turn play video continues on the discussion from the previous lesson and focuses on important decisions and mistakes to avoid going to the turn. In this lesson, you’ll learn about some common pitfalls that plague inexperienced players and how to fix those.

The theoretical part of the video covers some of the most important ideas like barreling away with equity and being realistic about the opponent’s flop range. ‘faLLout86’ warns against blindly betting on the turns after c-betting the flop and instead taking the time to consider player’s stats and tendencies as well as if the turn card could have helped their range.

The lesson continues with a  good number of example hands which should really help bring some of these theoretical concepts home. In these examples, ‘faLLout86’ explains different turn spots and shows why taking a step back and checking to protect your equity can sometimes be the right play as well.

The final video on the postflop play naturally focuses on the last street, the river. It uses the same format like the previous two lessons, first looking into some general considerations and common mistakes, proceeding to hand examples.

The river can be a tricky street as there is usually a lot of money in the middle by that point. Because of that, learning how to play the river better than your opponents will also help you significantly improve your profits. 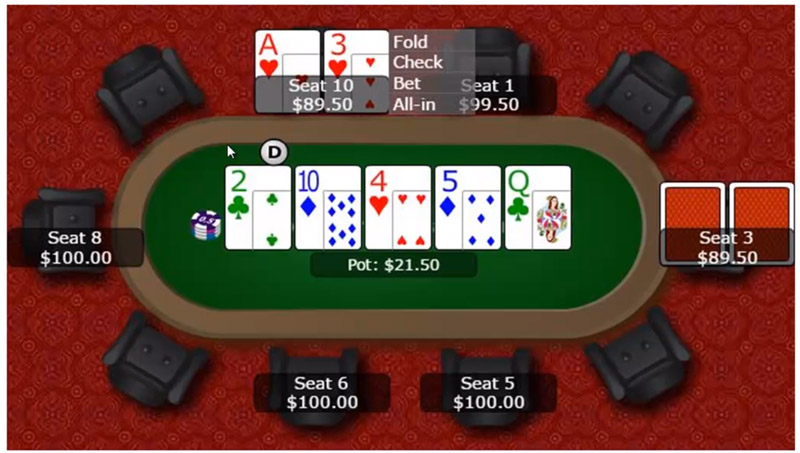 ‘faLLout86’ provides plenty of advice on how to go about doing this and what things to focus on when on the river. You should start thinking about different river cards ahead of time and deciding which ones you want to continue on and which ones aren’t favorable.

Constructing solid value bet and bluffing ranges is important but you need to be aware of who you’re up against. You don’t want to be employing the same strategy against solid regs and the fish.

The Raise Your Edge Elementary Cash Game course wraps up with two bonus videos that deal more with the meta game and your overall approach to poker. Both of these are a good watch as they explain some concepts you’ll definitely find useful on your poker journey.

The first bonus video emphasizes the importance of playing good, fundamentally solid poker. At micro stakes, thinking in terms of ranges will put you well ahead of the most of the competition. While you do want to make some adjustments based on your opponents’ tendencies, you shouldn’t be taking things to the extreme. If you’re trying to adjust too much or too soon to exploit other players, you might end up exploiting yourself.

Understanding the concept of bankroll management and why it’s so important is crucial for any player who has even semi-serious aspirations about the game. In this bonus video, ‘faLLout86’ explains variance and downswing and how they can affect even very solid, winning players. Since no one is immune to variance, it’s important to handle your bankroll properly and he suggests three different approaches you can utilize.

Is Elementary Cash Game Worth The $97?

This Raise Your Edge course is very basic and if you have been playing for a little while you won’t find anything in there that you don’t already know. Refreshing some basics has never hurt anyone, of course, but you don’t need to buy the whole course just to do that.

For players new to poker and looking to take up online cash games, Elementary Cash Game is a great course to get started. It will teach you some very important basics and provide you with some ideas on where you could go next on your learning path at a fairly low price.

This course alone is enough to make you a consistent winner in today’s online games at anything other than the smallest micros. You’ll definitely need to do more studying to become a solid winning player but if you take in all the knowledge from this course, you shouldn’t be a big underdog, either.

So, if you’re looking for a well-structured and easy-to-follow course to get you off the ground, this one will do the trick. I think it’s a solid value for money all things considered but don’t expect to start crushing the games after watching just few hours’ worth of videos. It will take more than that.