Bounty hunter or progressive knockout (PKO) tournaments have become a very popular type of game. Similar to regular MTTs in many of their aspects, these PKOs add a new dimension to the game because eliminating players comes with a monetary award.

Progressive knockouts are different from traditional bounty tournaments as well because of the value of the bounty assigned to a player increases as they eliminate others. This makes the math behind decisions in PKOs rather complex in many cases. 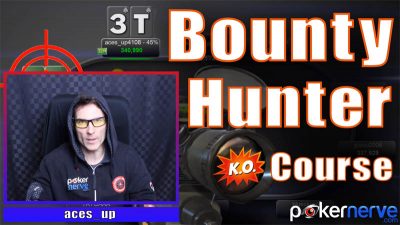 Are you supposed to call wider in some spots because of the bounty, how wide should you go, and how do you balance between bounties and regular prizes? These and many other questions that you’ve certainly come across while playing PKOs are addressed in detail in the latest course by PokerNerve called Bounty Hunter.

There aren’t many courses out there focusing on this particular type of MTTs, which makes Bounty Hunter that much more valuable and provide you an edge over the field. Playing these tournaments without properly implementing strategies to account for bounties can be a very bad idea, even if your fundamental tournament strategy is very solid.

The first video in this course is focused on explaining how to properly factor in the bounties in PKOs. It’s important to note that Bounty Hunter isn’t a beginner’s course to MTTs. It starts from the idea that you’re already familiar with tournament basics such as opening ranges, the importance of position, etc. If you are looking for a general introduction to MTTs, this isn’t it and you may be more interested in PokerNerve's Starter Road To Success course or some other poker training options.

PokerNerve’s Bounty Hunter is exactly what it says it is. It focuses specifically on adjustments required to prosper in this particular type of tournaments. If you have solid foundations, you’ll be able to build upon them and accurately adjust your play. 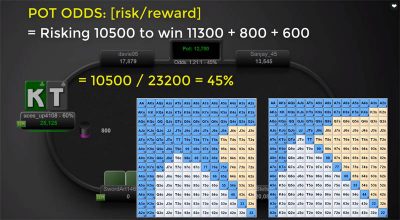 So, in the first video, Kelvin ‘Acesup’ Beattie focuses on explaining how to properly account for bounties. This is one of the most important skills in PKOs because you need a good system to use when figuring out whether to call or fold in a certain spot i.e. how valuable is the bounty relative to the number of chips in play. You may know what you’d do in a regular MTT but how does a bounty change your ranges?

In this introductory video, Acesup presents a fairly simple and easy-to-use system for factoring in the bounties, which will help you tremendously at the tables. He also goes on to explain the dynamics of these tournaments, underlying how the value of the bounty pool actually decreases as the tournament progresses and players are eliminated.

Of course, PKOs are still tournaments, so ICM will always have an effect on your decisions. This is something to keep in mind and explained in later videos. During earlier stages of a bounty hunter, though, you don’t have to worry about ICM that much and can use these guidelines pretty much as given.

Breaking Down PKOs by Stages

After the introduction, the course goes on to provide a detailed strategy guide for bounty hunter tournaments using three stages of play: early, middle, and late. Each of these three stages require a different approach and new adjustments as the value of the bounty pool shrinks and the importance of ICM increases as the tournament moves closer to the final table.

During initial stages of PKOs, ICM plays the smallest, almost negligible role in your strategy. Thus, videos in this section are focused on teaching the right way of thinking about bounties and required range adjustments without any additional factors to complicate things.

In the early stage of a bounty hunter, if a player losses a significant portion of their stack, calling them off with a wide range becomes a very appealing proposition because of the added bounty value. The bounty effectively increases your pot odds, sometimes to the point where you can call off with any two cards and be correct in doing so. 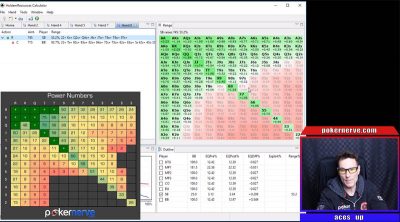 This is something a regular MTT player doesn’t really have to deal with so Acesup spends a fair bit of time explaining the math behind it. He also goes through numerous examples vs. different stack sizes (short, medium, and deeper stacks) to really bring the point home.

Additionally, he also explains how to use Holdem Resources Calculator, a piece of poker software that can be quite handy for figuring out your ranges in PKOs. In the final video of the segment on early stage play, Beattie explains advantages and limitations of Holdem Resources Calculator when used for PKOs, especially when trying to account for ICM.

The second set of videos in the Bounty Hunter course addresses middle stages of PKOs and Acesup is joined by Ben Hayles for this segment. At this point in a PKO, the relationship between the number of bounties a player has obtained and the number of starting stacks they have becomes more important, which influences the math.

In the first few videos, the focus is on playing against short stacks, where there is an added incentive to get involved. It is interesting to see some examples where certain types of marginal hands that would never come into play in a regular tournament.

Having in mind this extra value to be had, Hayles also goes into stealing and re-stealing opportunities. Applying the knowledge about wider calling ranges, you can sometimes steal the pots from your opponents when they decide to call off a short stack as their hand usually won’t be strong enough to put their entire stack on the line. 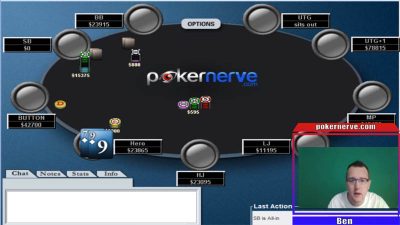 Two videos in this section also go into detail on how to properly define the bounty factor in PKOs in an exact way. Although the value of each bounty increases as the tournament progresses, the effect of the bounty factor actually decreases, which is a very interesting point. This happens because the number of starting stacks even in players with short stacks is much higher than during early phases.

Another important concept introduced in this part of the course is the idea of equity drop, i.e. how our equity drops in correlation with the bounty factor. The equity drop differs during different stages of a PKO and it can be anywhere from 4% to 6%. Hayles does a great job of explaining this idea and offers a simple way to use it to make more +EV decisions.

Late stages of a PKO tournament can be a bit tricky because this is where ICM becomes to play a big role and it becomes increasingly important to combine both the bounty factor and ICM into your decisions. To bring this point home, AcesUp uses examples from a regular $109 tournament and a PKO tournament with the same buy-in.

The video on the bubble play is definitely a great watch as it highlights some very important differences between these two formats that you might not think of immediately. For example, because of the additional prize pool, the pressure on short stacks is much smaller and they can afford to call off with wider ranges than they could in a regular MTT. 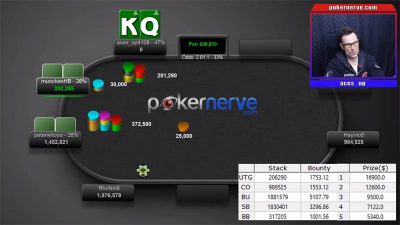 Moving on the final table, Beattie discusses some necessary adjustments required for PKOs. Using an example of a $215 bounty builder he won, he talks about various scenarios where decisions differ from regular MTTs. This is the most sensitive stage of a PKO as bounties tend to be big but ICM also really comes through.

One very interesting video in this segment talks about making deals and this one is definitely worth watching with attention. It explains how you should approach deal making differently depending on how bounties are treated in these scenarios. Depending on that and your own position (stack and number of bounties), you can make much better and more profitable deals.

After breaking down PKOs stage by stage, the Bounty Hunter course turns to several important areas of play particularly significant for this format, namely:

Each of these segments contains several videos that go into specific strategic adjustments required to make the best decisions in PKOs.

For example, being able to identify profitable isolation situations is very important. When there is a short stack all in, you ideally want to be heads up against them and push other players out of the pot. Figuring out how to do it and what hands to pick in different spots can be tricky but you should have a much better idea after watching these videos. As explained by Acesup, limping is a key strategy employed in this tournament format more frequently with the aim of isolating shorter stacked opponents.

In PKOs, there is often a big difference whether you’re up against a stack you cover or the other play has you covered. Covering players can widen their ranges in almost all spots, be it 3-bet pots, blind defense, open raises, or flat calls. The added incentive of potentially winning bounties of covered players makes this kind of approach reasonable. 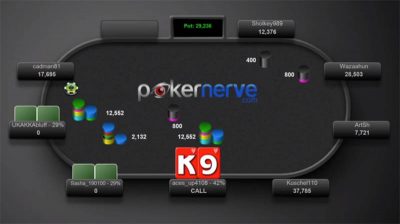 Finally, Aces_Up discusses multi-way pots. These are some of the most complicated spots in PKOs. With multiple players and various stack sizes in play, making correct decisions becomes much harder than in heads up situations. The video provides some very good examples and calculations, though, to help you better understand these spots and the best way to approach them.

The course concludes with a review of every hand Acesup won in the $530 bounty builder on Pokerstars. This review provides tremendous insight into how to practically approach a PKO all the way from early stages right to the heads up play where Aceup eventually goes on to win it.

We have looked far and wide for the best training sites on the market and courses. Unfortunately, there aren't very many Bounty Poker Courses available but Raise Your Edge do have their Bounty Beast Course which costs nearly over twice as much as PokerNerves and what I would consider to the very math dense. My personal opinion is that the Bounty Hunter course is the best bank for you buck bounty course on the market at the moment.

But if you want to do read more into the Bounty Beast course, check out my post here.

Is PokerNerve Bounty Hunter Worth It?

As mentioned in the introduction, the amount of training materials specifically for progressive knockout tournaments is somewhat limited. Although this is a rather popular format that more and more players are taking up, strategy resources for it are still somewhat scarce.

The Bounty Hunter course delivers on all of its promises. Kelvin Beattie and Ben Hayles leave no stone unturned and no question unanswered. For someone looking to improve their play in PKOs, this course provides a lot of value beyond any doubt.

If you are ready to jump in, you can pick the Bounty Hunter Course up for $374 for lifetime access using the coupon code HOWTOPLAYPOKERINFO which will get you 25% off.

However, it can’t be overstated that this isn’t a beginner’s MTT course. If you’re looking to make your first steps into tournaments, the material contained in this series can be confusing and even counterproductive. All ranges, strategic ideas, and considerations have been tailored for PKOs and many of them will be –EV in regular MTTs.

So, to sum it up, as long as you know what you’re looking for and have a bit of experience with PKOs, PokerNerve’s Bounty Hunter should be an excellent investment. Many players in these tournaments make some fundamental mistakes and even if this course just teaches you how to avoid these, you’ll be well ahead of the curve.